Stitch is a character in Disney Heroes: Battle Mode. He is from the Disney movie Lilo & Stitch. To unlock this character, you need 80 Stitch chips.

Experiment 626, also known as Stitch, is an alien being with a vicious bite and powerful plasma guns. He is also pretty cute and fluffy. 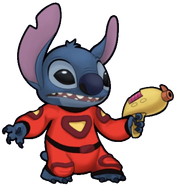 Add a photo to this gallery

Retrieved from "https://disneyheroesbattlemode.fandom.com/wiki/Stitch?oldid=6317"
Community content is available under CC-BY-SA unless otherwise noted.